Toua Yang started his first day as an electrical apprentice unfamiliar with how to use a drill and with no previous experience working in construction. 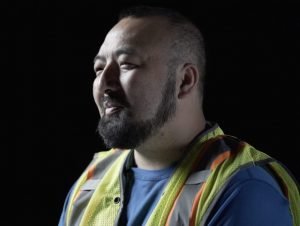 “It was intimidating at first – not knowing anything, just going up on a 6-foot ladder was scary, but now all of that is second nature to me,” Yang said. “A lot of other apprentices grew up with construction workers in their family or some sort of construction experience. I didn’t have that, so I had to set my own standard and commit to learning something new.”

Yang is now a second-year apprentice with the International Brotherhood of Electrical Workers (IBEW) 110 through the Saint Paul Electrical JATC. He knows a career in construction as an electrical worker is what he’s meant to do.

“It just takes curiosity and commitment,” Yang said. “After working in this field for two years, you see how vital it is. Many people take it for granted because electricity is so available that you don’t have to think about it.”

A Pathway to Construction

Yang grew up in Sheboygan, Wisconsin, and spent his youth biking around and playing outside in the small city located on the shore of Lake Michigan. In high school, his favorite classes were language arts and art.

“Growing up in my town, it felt like everyone knew each other, and most people would describe me as easy going,” Yang said. “I work hard but I get along with everyone and I know those elements of my personality carry over to my success on the job site.”

After Yang graduated from high school, he attended college but did not complete a four-year degree.

“I remember I was looking forward to the experience (of college) but I was very unsure as an 18-year-old about what I really wanted to do,” Yang said. “I also was concerned about debt, but I had no concept of the type of loan I was taking out. I have never had $40,000 before so when I was signing my student loans, I had no concept of how much money that was or how long it would take to pay back.”

Eventually, Yang worked as a banker before deciding he had to start over.

“I was very confused in college and when I found out it wasn’t for me. I got a desk job but, in the office, it was either slow or I was overwhelmed with work and ended up taking it home,” Yang said. “There was no excitement and no work-life balance.”

Yang has enjoyed his experience working in construction because the nature of the jobs is project-based.

“You show up on site, complete the work and you literally can’t take it home with you,” Yang said. “That has been amazing for me. Then, after work is dedicated to spending time with my family.”

Construction Career Advocacy for the Next Generation

“The six-month course through Summit helped me get my feet wet. It was just the right amount of learning to build my confidence and skills,” Yang said. “As for union work, I am currently in a union and I would recommend it – every shop is different, but I feel like I represent my union every day and they invest equally into my wellness and negotiate high wages for me.”

Yang recommends a career in construction to people who like being active, want variety in their worksite and work experience and want to leave their mark on Minnesota. He said one day he will recommend the trades to his now 5-year-old son as an alternative to college or joining the military.

“I have colleagues that started in the trades when they turned 18. Now, they are in their mid-twenties and early thirties and making close to six figures,” Yang said. “It’s worth exploring your options because this is not a job, it’s a lifelong career.”

Yang understands the struggles many high school seniors face when it comes to choosing if college is right for them or the feeling of nervousness that comes with trying something new.

“I know so many people come from a place like me, where you feel lost and you might have an office job but it’s not fulfilling or you are overworked,” Yang said. “Walking into something new is challenging but that challenge is worth it, and it will teach you about who you are and what you really want out of life.”

C.R. England, one of the nation’s leaders in transportation solutions, has announced a multi-million dollar driver pay increase which will impact a majority of its Over the Road drivers, making it the largest pay increase in C.R. England’s 100-year history. — READ POST

Dakota Supply Group (DSG) has awarded $18,020 scholarships to 17 individuals who are furthering their education in the trade industries. This year’s recipients each received a $1,000 scholarship, and Brady Fried from Bismarck, ND, was awarded a $2,020 scholarship. The — READ POST